We Rise Again from Ashes

Ash Wednesday is the official beginning of the season of Lent in the Church. For the next forty days, people will be "giving up" things as a form of sacrifice and holiness to prepare for Easter. More importantly, this is also a season of prayer and penitence; while giving up things is a good way to get there, prayer, fasting, and alms giving are important too.

While it is not important that you know what all of my Lenten sacrifices will be, since each person's plans are personal, suffice it to say I will not be satisfied by simply giving things up. Below you will find YouTube videos of a prayer I have elected to say every day whenever I have the free time. This set of three videos shows the Chaplet of Divine Mercy, which is just an overall great prayer. If you want more information about it, go here. It is simply a beautiful prayer, and praying for mercy and peace for myself and the whole world is a great way to prepare for the season of Easter. (Not to mention that the prayer was first revealed to the recently canonized St. Mary Faustina Kowalska, of Poland. A shout out to all my Polish family!)

Happy Ash Wednesday to all; I for one will be getting my ashes tonight.

Happy Fat Tuesday to all...

Since I have blogged about these delicious Polish donuts called paczki in the past, I felt it was not necessary to go into any detail this time around. If, however, you are so inclined to read up on them from my past post, and a post my aunt Cheryl wrote, go here or here. Suffice it to say, they are delicious, even the store-bought ones. I would like to get my hands on some fresh-made ones sometime though.
Plus, as they say, a picture is worth a thousand words. Enjoy! 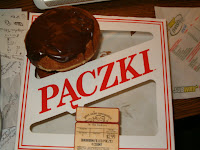 A major component of the research I am doing as a senior in Biology involves the use of gas chromatography. The gas chromatograph uses heat and a long metal tube to separate gas (or even liquid) components of a mixture in order to determine concentrations of the components. Based on the size of the component (molecular weight) and retention time within the tube, different components "come out" at different times. All the while, a recorder is keeping track of what components are "coming out" of the machine by marking peaks on paper. The heights of the peaks are proportionate to the relative concentrations of each component, so by measuring the peaks, you can determine concentrations in the sample you injected.

It all sounds very complicated, but in practice is quite easy. For the research I am doing, I am measuring acetylene reduction activity by an enzyme (nitrogenase) present in certain bacteria, in my case, a bacterium that lives in a symbiotic relationship with plants. Acetylene is a gas with the formula C2H2; the nitrogenase enzyme "reduces" acetylene to ethylene, a gas with the formula C2H4. After injecting a measured amount of acetylene into a vial containing the plant/bacteria symbionts, the vials are set aside to allow for photosynthesis and acetylene reduction to occur over time. At certain time intervals, a small amount of the gas phase is removed from the vials and injected into the GC to measure the relative concentrations of acetylene and ethylene present in the sample.

Below I have scanned in a print-out that I recorded during an acetylene reduction assay that I performed this past Friday. The first peak shown is that of methane gas (CH4), which is apparently present in the tank of acetylene already. The second peak is that of ethylene, the peak in which I am most interested. Finally, the third peak is that of acetylene, which is so large that our graph cannot fully capture it. There are two sets of peaks shown in this print-out. Sorry that the image is so straining on the eyes; the lines on the paper ended up standing out more than the red peaks. 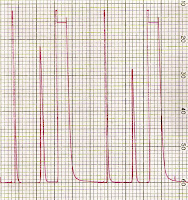 Even though this whole process is very time-consuming, according to my professor/advisor, I had excellent data from my acetylene reduction assay. Apparently the bacteria in my plants are readily reducing acetylene, and increasing with time, a good indicator of the nitrogen fixation activity that the nitrogenase enzyme actually performs. Nitrogen fixation is the process by which nitrogen gas (N2), the largest component of air, is "fixed" by the bacteria into ammonia (NH3), which can be used up by the plants as a nutrient. So, you see, the good results from the acetylene reduction outweighs the amount of time that I spent in the lab.

I can imagine that at least several of you have no interest whatsoever in this information, and may find this information boring and useless. I can admit that it is a little bit boring to read about this stuff; science has to be experienced, not just read. So, believe me when I say that it is much more interesting in practice. Wanna try sometime?

Let it be known to all that today, February 8, 2009, two Very Important People have birthdays!

The first VIP celebrating today is my mom, Karen. Unfortunately I will not be home to celebrate and spoil her on her day, but what can you do? More unfortunately still, she will be spending her day working and doing paperwork. Happy Birthday anyway!

The second VIP celebrating today is Adrienne. Unfortunately I have not grown the ability to spontaneously fly, so I can not make it to sunny CA to celebrate and spoil her on her day either. More unfortunately still, she will be working too! Happy Birthday anyway!

I hope both of you have a great, happy, hopefully somewhat relaxing day, and that you both have many, many more Happy Birthdays to come!
Posted by Sean M. at 1:49 PM 1 comment:

Sean M.
Powell, Tennessee, United States
Welcome to my Blog! I am Sean M. from Powell, TN. I am a recent college graduate (May 2009) from Xavier University with a B.S. in Biology. I am a Pharmacy Technician at Ingles Markets in Powell, where I have worked since I was 16. I am currently studying to take the Pharmacy Technician Certification Exam in order to become a Certified Pharmacy Tech, which I hope will prepare me for a career in medicine in the future. In my blog I intend to look at the interesting, and sometimes the not-so-interesting, aspects of my life, trying to find the silver lining or humor in it. I invite anyone to read my blog, ask questions, and make comments. Thanks for reading, and come back to visit!

Other Blogs of Interest